This week I’ve picked up on a piece by Solatube International that explains the significant and ongoing process of development and improvement that goes on at Solatube. These people really believe in what they do and are passionate about providing the best sun tunnel solutions in order to deliver daylight in to areas where you need it. I am not aware of any other sun pipe system or company that comes close to the dedication to product improvement that Solatube demonstrates. So perhaps you might feel reassured to learn a little more about this.

It’s true that skylights make a space more inviting, but what if we told you the right system can deliver even more benefits? Benefits that include directing light where you need it most, eliminating harmful UV rays, and improving your home’s energy efficiency? We’re talking about the original light catching Solatube sun tunnel, or sun pipe (also known as a tubular skylight), a trailblazing system that not only pipes light to your space but does so in the healthiest and most functional way possible.

A ‘light catcher’ is a revolutionary alternative to traditional skylights that we now call Solatubes, and which other sun pipe systems call sun tunnels, sun pipes and tubular skylights. With a tubular daylighting sun pipe system you still get the beauty of natural light, but with Solatubes innovative “light-catching” design, you don’t get any of the hassles.

What do we mean? Skylights have gained notoriety for leaking, reducing a home’s energy efficiency, and overheating. They let hot air out during winter months and hot air in during summer months, meaning your heating system must work harder to maintain comfortable temperatures. They’re also susceptible to cracks and breaks that require professional (and costly) repairs and replacements.

If that were the end of the story, skylights would never have evolved into their full potential. Thankfully, the Solatube story took over where traditional skylights fell short. In the 1980s, an independent Australian inventor conceived of a product that efficiently directed daylight into rooms. His product, known widely as tubular daylighting devices (TDDs), hit three high points:

This inventor sought a patent for his design in 1986 and, four years later, the first-ever Solatube sun pipe sold. To say it transformed the daylighting industry is an understatement; it allowed sunlight into rooms and spaces that were previously confined to the dark. It similarly changed the way people think about skylights, evolving from square or rectangular roof windows into a versatile system that delivers the purest light possible.

The original Solatube sun pipe design featured a rooftop dome that captured and redirected daylight through a sophisticated reflective cylinder. The light was then diffused at the ceiling level into a room of your choosing. This system quickly became the best-selling skylight in Australia.

In 1992, the Solatube sun pipe made its way to the United States. Demand spread across the globe, and the company’s technology similarly evolved. For instance, Solatubes of different sizes were introduced alongside accessories like ventilation kits and the integrated electric light to further increase functionality. 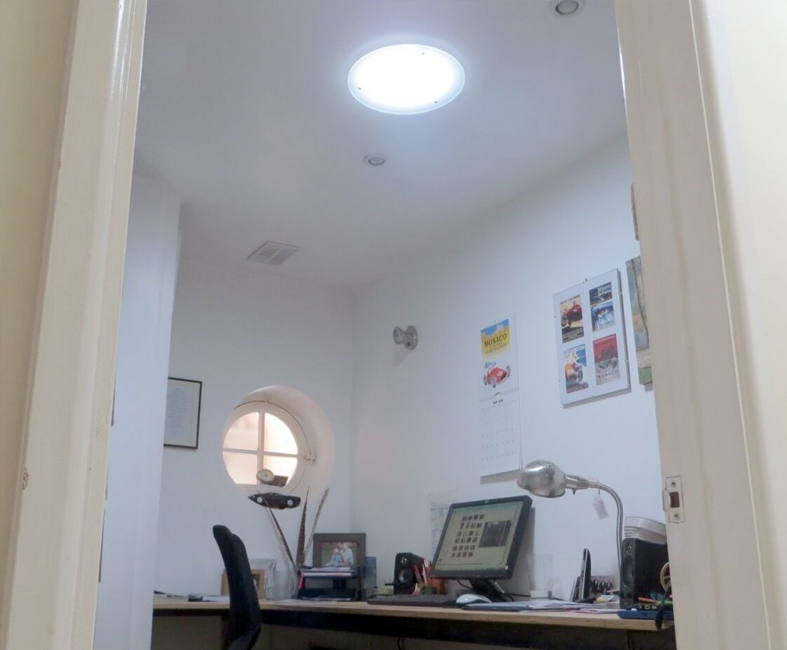 The Solatube sun tunnel improved upon the earliest product with a patented Light Intercepting Transfer Device (LITD) and Raybender Technology. This technology delivers maximum output from low-angle light and is designed to deliver light to the smallest of spaces, including closets, hallways, and bathrooms. And with factory pre-assembled, high quality parts, installation can be reduced by up to 50%.

In 2000, the company released a line of Solatube sun tunnels specifically designed for commercial buildings. These feature larger openings to capture more daylight, can accommodate a variety of ceiling configurations, and are suitable for commercial applications such as retail locations, offices, and healthcare facilities. Additional improvements over the years include:

Sustainable living is more than a trend; it’s a necessity for a healthy planet, especially in the face of climate change. Homeowners who want to reduce their carbon footprint can do so with Solatube sun pipes, designed to lower utility bills and contribute to stable interior temperatures.

When your home has sufficient quantities of natural light, you immediately decrease your dependency on electric lighting and likewise reduce emissions. All forms of electricity generation impact our land, water, and air. In the UK, therefore, electricity use accounts for a significant portion of each person’s environmental footprint.

The Price of Electricity

Reducing your home’s electrical use is a key step to greener living. It cuts back on greenhouse gases and other air pollutants while making your home more self-sufficient. But this doesn’t mean you must live in the dark. Solar power can meet and/or supplement your lighting needs, reduce your contribution to climate change, and fill your home with the healthiest light possible.

One aspect of Solatube sun pipes we haven’t yet discussed is their ability to filter out harmful UV rays and infrared wavelengths, which fade fabrics and transfer heat. All that’s left then is pure, desirable light delivered in a consistent colour, regardless of the season or time of day. This means less strain on your eyes and a more aesthetically pleasing space; for commercial applications, the delivery of consistent natural light can improve productivity and provide a more comfortable work environment.

But healthy light is more than a theory; sunlight is one of the key ways our bodies produce vitamin D. This nutrient helps regulate energy levels and mood, and when we lack sufficient levels we can become lethargic and/or depressed. Natural lighting can also reduce headaches, eye fatigue, and positively influence the immune system. Last but not least, natural light is associated with lower blood pressure and reduced stress levels.

Homes continue to be built closer to each other, making privacy a prized commodity. Solatube sun pipes provide natural light without further sacrificing solitude, especially in bedrooms and bathrooms where we need privacy and light in equal measures.

Innovation, thought leadership, and cutting-edge technology have enabled Solatube sun tunnels to transform spaces in all corners of the world. Natural light allows people to clearly see their environment, from the unique colours and shapes to the textures and patterns that surround us every day. These are the traits Solatube sun pipes have brought to life for the last 30 years, using a range of commercial, residential, and industrial products to harness our most precious resource: sunlight.

Natural light is more than a commodity; it’s essential to well-being. By letting it into our personal and professional spaces, we promote a healthier planet and healthier people. Learn how the original light catcher can be used to improve your home or office by contacting Solatube today.

Throughout the whole of Scotland, Solatube Scotland is the recognised distributor and installer of Solatube sun tunnels, or light pipes.

If you are interested in bringing natural light into your home, why not contact us at info@solatubescotland.co.uk; 07778 283 427 to find out whether a Solatube sun pipe can help you. Typically, a fully installed system might cost anywhere between £900 – £1,200; that’s supplied, professionally installed and includes the VAT.