One of our Solatube installers was recently asked to replace 2 Velux flexible tube sun tunnel systems that a customer had inherited when they moved in to their bungalow.

They were both installed in her kitchen and she was incredibly disappointed in the lack of light they delivered.  Essentially, her kitchen was still far too dark, even with 2 systems installed.  The customer had already completed some of her own research and recognised that a Solatube system with rigid tubing and a dome would deliver far more light and hence she wanted both systems replaced.

Make sure your installer knows what they are doing

Having undertaken a survey the installer proposed an alternative, phased approach that would save her money, whilst also ensuring she had more light.  Not only were the systems not delivering very much light, they had also been installed in the wrong ceiling positions and were poorly aligned in the roof space making tube angles too extreme.

Instead of the cost of replacing 2 systems our installer proposed installing a single 350mm dia Solatube 290DS in-between the two same size sun tunnels. This alone would deliver much more light than the combined effects of the 2 flexible tube flat glass systems and be a cheaper option for her. 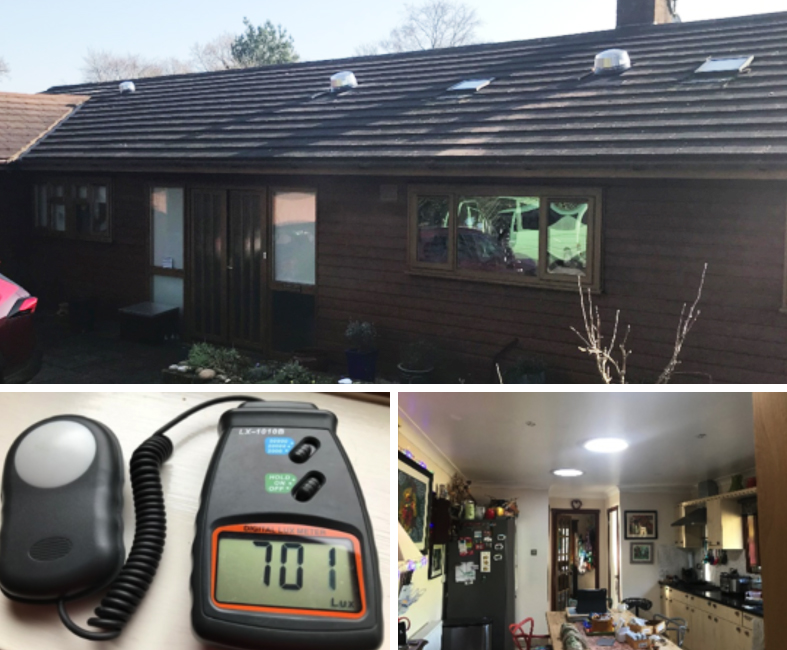 The result was massively convincing with light pouring in through the Solatube system and flooding the kitchen with bright daylight, whilst the 2 flexible tube flat glass systems remained dull and ineffective.

At this stage the customer felt that the 2 dull systems looked rather odd and asked if we would still replace them.  In order to save her money our installer suggested that we just replace the flexible tubing with rigid tubes to help increase the light levels and so balance out the effect in the kitchen. This was a far cheaper option.

On completing the tube replacements the 2 dull systems were now much brighter and, according to the installer’s light meter readings, around 4 times brighter than with the flexible tubing. That just goes to show the sort of difference Solatubes highly reflective tube material makes!

However, it also gave our installer an opportunity to compare the difference that a dome makes compared to a Skylight / flat glass collector, as all systems now had the same, highly reflective Solatube rigid tubing.

It’s worth noting that all systems are installed close together on the same, north facing, but shallow pitched roof.  When our installer took light meter readings the Solatube with the dome was delivering 62% more light than the Skylight flat glass collector – that’s an enormous difference in the amount of light you get by using a Solatube Sunpipe system with a dome.

In the pictures above, you can see the 2 Skylight flat glass collectors to the right of the picture with a single Solatube dome in-between them – these were all in the kitchen. The other 2 Solatube domes further to the left were installed subsequently in the entrance hall and corridor, once the customer had seen how incredibly bright the Solatube systems were.

So, whilst none of the above is entirely ‘scientific’, it’s actually a genuine ‘real world’ demonstration that shows just what the differences are.  OK, you have to take our installers word for the readings he took with his light meter, but we think that even from the picture of the kitchen you can see that the nearer Solatube is much brighter than the other system, even though the picture tends to flatten out the more noticeable difference you can see in real life.

So when you are considering a tubular skylight sun tunnel system, first of all think:

And if you are suffering with poor light from an existing system with flexible tubing, why not ask us to replace it with rigid tubing and gain 4 times more daylight!

If you are interested in bringing natural light into your home, why not give us a call at Solatube Scotland to find out whether a Solatube sun pipe can help you.  Typically, a fully installed system might cost anywhere between £900 – £1,200.  That’s supplied, professionally installed and includes the VAT.

For more information and pricing, email info@solatubescotland.co.uk or call Matthew on 07778 283 427 or check out our Ultimate Guide to Sun Tunnels